Originally developed to protect divers while underwater, the wetsuit is an important piece of technology that was designed to fit like a second skin, protecting against the cold and hazards such as sharp objects and chemicals. Over the years, it has been further developed to suit surfers' needs too.

Today's modern wetsuit was invented in the mid-20th century. However, the debate over who was responsible has been a controversial topic for decades. A number of inventors were involved in its development, but no one person can take full credit. 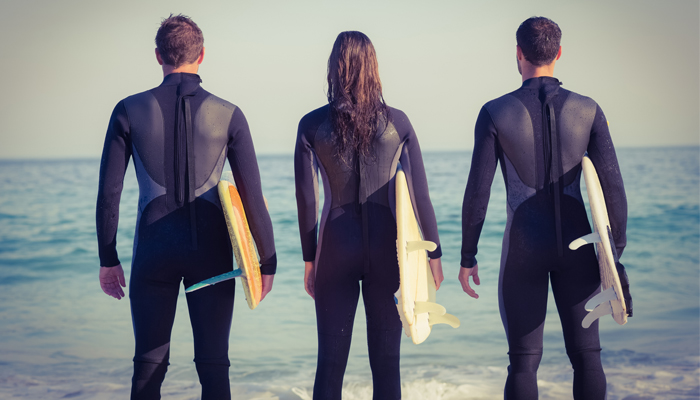 The original diving suit was developed for deep-sea divers. It was vastly different from today's "second skin" wetsuits. As the forerunner to today's modern design, the Mark V suit was first used by the United States Navy in 1916.

Its development began as long ago as the 18th century. The hard, atmospheric-pressure diving suits were armoured to keep the diver safe at the correct pressure at any depth. It often incorporated a breathing gas supply. One pitfall of the hard diving suit was its buoyancy - a problem often countered by using a weighting system.

The wetsuit began to evolve during World War II, when Italian frogmen wore rubber wetsuits. As a result of military research into various rubbers and plastics, neoprene fabric was discovered as an ideal choice for lightweight wetsuits just after the war.

The wetsuit as we know it today evolved in the mid-20th century, which is when the debate began about who invented it. One of the most important people involved in its development was Hugh Bradner, who was working to further improve the equipment used by US Navy frogmen.

In 1951, the first neoprene wetsuit was created. It was reported that Bradner decided to spend more time improving the Navy's equipment. He sent his wetsuit ideas to physicist Lauriston Marshall, who was involved in a study of underwater swimmers being undertaken by the US Navy and the National Research Council Panel.

Bradner was joined by colleagues at the Berkeley Radiation Lab to test various materials. While their research was a success, he didn't plan to make the wetsuits for the general public. He later recalled that government employees at the time were not permitted to profit financially from their work.

When his designs were completed, the government delayed testing the wetsuits and their mass production never happened. Finally, in March 1957, Bradner was informed his "experimental swimsuit" wasn't going to be "tested" by the Navy. Another design had been adopted, comprising an undergarment that could be worn with the military's existing standard "swimwear".

After the six-year delay, Bradner didn't ever patent his wetsuit. He envisaged "no large commercial application" because, at the time, there were only a few hundred divers and surfers.

On leaving school, American businessman, surfer and diver Bob Meistrell joined the US Army. After leaving the military, he and his brother became lifeguards in Los Angeles. In 1953, they invested in Dive 'N' Surf - the surf shop in Redondo Beach, owned by diver Bev Morgan. As well as his business interests, Meistrell became a diving instructor, working with film stars such as Gary Cooper, Lloyd Bridges, Charlton Heston and Richard Harris as they prepared for roles.

Morgan discovered the rejected design for the military neoprene wetsuit and decided to start selling it from his shop. Initially, it wasn't popular but in 1959, the film Gidget changed this. Based on the book of the same name, written by Frederick Kohner, the film told the true account of the surfing culture at Malibu Point, from the point of view of his daughter, Kathy. The movie made the wetsuit popular and Meistrell discovered their product line had started selling.

He established the famous Body Glove brand and introduced more products for surfers and divers throughout the 1960s. The Meistrell family still owns 25% of Body Glove today.

The third person who was said to have invented the wetsuit was Oregon-born businessman, Jack O’Neill. Born in 1923, he started surfing in the 1930s, became a Navy pilot during World War II and afterwards opened one of California's first surf shops in a garage. In 1952, he launched the now famous O'Neill brand of surf wear and equipment.

Widely cited as the inventor of the wetsuit, he was hailed a surfing pioneer. From his beachfront property in Santa Cruz, he was often mentioned in the press as having created the wetsuit. Historians lean towards Bradner having invented it, although O'Neill did more to develop the design over a period of 60 years than any other entrepreneur.

The technology behind wetsuits may not be what you think - they don't work by keeping the wearer dry. Instead, they are designed to let a thin layer of water in. The water is trapped and warmed by body heat, hence the importance of having a tight fit. Thick neoprene is the best fabric for the surfer, as it's warmer.

Wetsuits have evolved since the 1950s, when they didn't have an inner lining. They were delicate and tore easily in the early years. The next generation of wetsuits was lined with nylon, reducing their sticky texture, although this made the suit less flexible.

By the 1970s, wetsuits were made of double-backed neoprene stitched together, but new techniques were developed for joining the seams, such as seam taping, gluing or binding. The modern technique of blind stitching was developed, using a curved needle that didn't go all the way through the neoprene. This meant there were no puncture holes, as with regular sewing, while the seam was flat, making the wetsuit more comfortable.

In 1989, Body Glove created the non-zip wetsuit, while new materials were introduced, including spandex and other thermoplastics, for use in warm water. In the 1990s, titanium was added to some wetsuits. Today, it's a regular addition to high-end wetsuits, as it helps retain body heat, creating maximum thermal insulation.

You’re never fully dressed for the waves without a carefully considered board!