To Surf or Not to Surf? That is the Burning Question!

There has been conflicting advice so far on whether people are allowed to surf during the COVID-19 pandemic. With the lockdown and social distancing in place across the UK, the subject of surfing has largely been a grey area.

While people are still allowed to leave the house for their daily exercise, questions have been asked about whether surfing is considered part of your daily exercise. Advice from the police in Devon and Cornwall caused confusion in April, when initially they said it was okay to drive a reasonable distance to the beach.

However, the following day, they clarified the information. The new guidelines appeared to imply that although people who lived nearby could walk to the beach, it didn't follow that they should get in the sea. As everyone was asking whether they were allowed to surf or not, the RNLI stepped in to give its views. 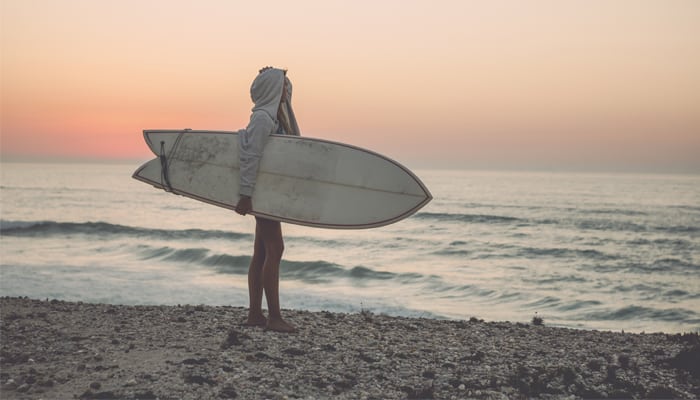 Is it legal to surf during lockdown?

Steve Instance, an RNLI volunteer and surfer, said people needed to think about the impact their actions would have on others and advised surfers to "skip a few weeks".

He points out the problem isn't a person's ability to surf, or whether they have gone to the beach alone. If one person goes in the sea to surf and others see this happening and think it's okay, it can lead to more people going to the beach to follow the trend.

With the sunny weather, people have been going to the beach anyway and ignoring government advice on social distancing. If anyone got into trouble in the water, this could involve the lifeboat having to go out, putting more lives at risk. The RNLI advises people that they "shouldn’t" be in the water right now.

There are no lifeguards on our beaches at the moment. Although people are allowed outside for one form of exercise, the RNLI recommends that the exercise should be on land, rather than in the sea.

Should there be an emergency due to someone surfing, they would have to dial 999 to call the coastguard. Even if one person went to the beach to surf and had an emergency situation, the RNLI crew would have to go out. They would be cramped together in the lifeboat, or coastguard vehicle, where it's impossible to maintain social distancing.

They would also be putting an unnecessary demand on our already overstretched emergency services. Steve points out that the police and government's stance on one thing is clear - people should stay at home to protect the NHS and save lives.

Can you drive to the beach?

In terms of the driving, Steve says that's for the police or government to take a stance on, but he adds that people should be "really considerate" about what they're planning to do until the crisis is over.

The RNLI is concerned that people will unintentionally put themselves at risk, especially now the sunny weather is making more people want to go outdoors. There has been mixed advice to date on whether people are allowed to drive anywhere to take their daily exercise.

Early suggestions that people could drive to an outdoor location far from their home to take exercise have now been retracted. The police have warned that people shouldn't use sunny weather as an excuse to break the lockdown.

They say if you live within walking distance of your local beach, it's permitted to walk across it for exercise, using common sense and avoiding times when there are a lot of people about. However, you are not permitted to drive to a beach, or to a picnic area, farther afield to meet other people outside your household.

There have been reports of people gathering at popular spots along Cornwall's south coast. Even though public car parks are closed to discourage gatherings, visitors are "dumping" their cars nearby and heading for the beach, according to the RNLI.

If the police catch anyone socialising on the beach, they can issue an instant penalty of £60. A repeat offender will have the fine doubled to £120 for their second offence. The fine can continue to increase for each offence up to £960.

Can coronavirus spread in water?

The question of whether coronavirus can spread through sea water is a complex one - and there's no definitive answer yet. The likelihood of airborne ocean-spray risking viral transmission has not been fully investigated or explained.

Scientists at the University of California say surfers believe they're safe if they stay six feet away from each other. However, this is true only if the air isn't moving - when most of the time, there's wind at the coast. The scientists say small drops of virus can get blown around or float in the air.

Researchers at the University of Sydney say this is a "theoretical possibility", but it's tricky to say for sure whether airborne virus particles can be carried on the ocean breeze and travel.

The consensus is that we're learning more about COVID-19 all the time and the situation is continually evolving, but there isn't any clear evidence yet on how far it will travel in the sea. The advice from scientists is to avoid close contact with other people, both on land and in the sea.!

Now’s the perfect time to plan the board of your dreams!

Ocean Magic is famous for creating the ultimate surfboards at our Cornwall factory. We look forward to offering our services for your future surfing endeavours - when the current crisis is over.

Please contact us for more details about our top-quality surfboards.