The World Surf League is the international governing body for professional surfers. It launched the first world circuit of professional surfing competitions, encouraging event organisers to choose remote locations with top-quality surf, rather than the usual well-populated, metropolitan areas.

In recent years, the WSL has been campaigning and taking practical steps to support the marine environment with its #StopTrashingWaves initiative, aimed at promoting sustainability and raising awareness of environmental problems, in the hope of combatting the growing ocean and climate pollution crisis. 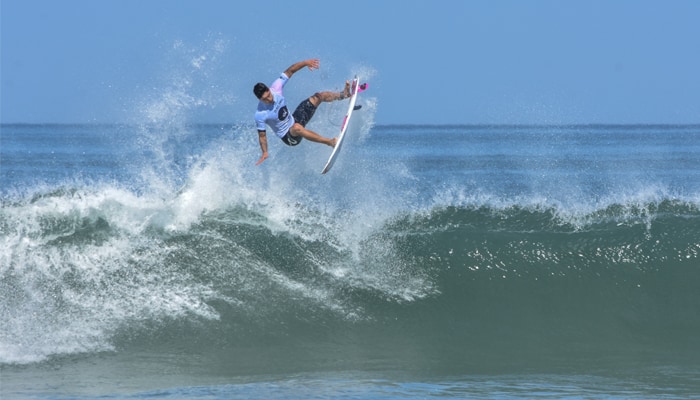 Back in 1976, Hawaiian surfers Fred Hemmings and Randy Rarick organised the first pro surfing world championship tour with a series of unaffiliated events around the world. They also created the first world governing body for professional surfers, the IPS, or International Professional Surfers. Both highly respected figures in the surfing world, Hemmings was 30 at the time and Rarick was 26.

Born in Seattle, Rarick’s family moved to Hawaii when he was five. He's said to have been involved in every major surfing event of the past 40 years - he was Hawaiian State Champion of 1967. Visiting more countries than any other surfer in history (more than 100 at the last count), he has surfed in at least 60!

The IPS organisation developed an international ranking system and encouraged the top surfers all over the world to get involved. The first world champion of the new tour in 1976 was Australian Peter Townend, with 5,593 points.

In 1977, the world champion was South African pro surfer Shaun Tomson with 5,948 points. The first female professional surfing champion was Margo Oberg of Hawaii with 4,850 points.

In 1983, the IPS became the Association of Surfing Professionals - a title it retained until the end of 2014, when it evolved into the World Surf League.

There aren't too many rules in professional surfing, but the IPS brought a few in to coordinate the sport. They ensure the surfers keep safe, the competitions are fair and the surfing is world-class.

Competitions are comprised of rounds and each round is made up of heats. Two to four surfers in each heat are judged on their two highest-scoring waves. They can score up to ten points per wave for a heat total of 20 points.

The judges score on the surfers' commitment, the degree of difficulty, the combination and variety of major manoeuvres, progressive and innovative manoeuvres and the power, speed and flow of the moves. A score of between four and 5.9 is average. Anything above eight is classed as excellent.

The surfers are then awarded points based on their placing after each event. The points dictate the rankings and at the end of each year, the male and female winners are those at the top of the rankings.

There have been some spectacular performances over the years:

The world record for the highest wave ever surfed is held by Rodrigo Koxa, of Brazil, who rode an 80ft-high monster at Nazaré, Portugal, when he was 38 years old. He was awarded the Guinness World Record title for his feat, on 8th November 2017, followed by the Quiksilver Award from the World Surf League.

The previous record was held by Garrett McNamara, of the United States, who rode a 78ft wave at Nazaré on 1st November 2011, when he was 44 years old. He had been towed into the wave from a jet ski and was riding a 6ft Dick Brewer tow board.

The Stop Trashing Waves campaign was launched in June 2019, when the World Surf League invited surfers to make a difference by supporting its sustainability commitments. The first event was a worldwide paddle on 15th June to celebrate International Surfing Day.

Other events and initiatives have included Surfing South Africa's Learn To Surf outreach project, while Ocean Pledge has helped to create "Blue Events" and the NSRI has launched programmes to educate the public, surfers, school children and surfing outreach programmes about ocean awareness and safety.

The campaign is banning single-use plastics from all of the WSL events and organisers have pledged to leave every beach in a better condition than they found it, following each surfing event.

Details of how you can participate in the eco-campaign can be found on the WSL website.

The World Surf League's events for 2020 are already well underway. One of the major new events this year is the Piha Pro, which is part of the new WSL Challenger Series. Making its debut on 14th March 2020, the men's and women's event will be part of the world tour until 2022.

The inaugural Piha Pro is expected to attract a massive international field as part of the new WSL Challenger Series. Some of the surfing world's most famous stars will face New Zealand's exciting local talent.

New Zealand's Olympic hopefuls and WSL Championship Tour competitors Paige Hareb and Ricardo Christie can't wait to take on the world's best in their home waters. Hareb says New Zealanders normally have to watch the major events online, so it will be "awesome" for them to see the contest live on their own beaches.

Ocean Magic's 40 years' experience goes into every surfboard we hand-craft at our Cornwall factory. Please contact us to find out more about our bespoke surfboards.