The War and Surfing

The Ocean Magic team will be observing the 2-minute silence as a mark of respect for our war heroes – we will remember them.

Not only did World War II help to spread surfing, it also saw the launch of a new generation of lighter surfboards. The development of chemicals and new materials including fibreglass, styrofoam and resin enabled surfers to handle more challenging waves, thanks to the modern boards made from these new materials.

Just before the outbreak of the Second World War, American surfer Alfred “Al” Gallant Jnr had revolutionised surfboards by waxing them, preventing the cut knees he had experienced prior to this. Born in 1918 in Los Angeles, he was drawn to the ocean and began to surf at Palos Verdes Cove in 1935. 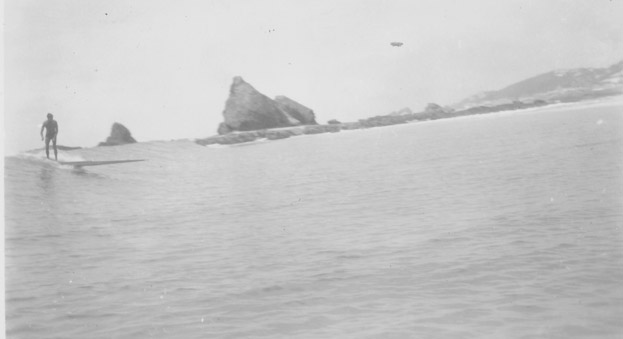 America was starting to emerge from the Great Depression and a handful of surfers made their own boards and headed to the coast. The challenge was to retain their footing on the smooth surfboard while riding the waves. It was all too easy to slip, so the surfers began coating their wooden boards with a layer of varnish infused with sand.

Although it increased traction, it also meant their knees were badly scraped, as were their feet, chest and thighs. Gallant described how kneeling on the boards to paddle out would lead to great pain, as his knees would bleed. He still had the scars 60 years later!

One night, arriving home from surfing at the Cove, he walked across the living room, where the floor was newly-waxed by his mother. His feet almost stuck to the liquid wax - leading to the brainwave that he could put it on his surfboard to prevent slipping.

He took the bottle of liquid wax to the beach the following day and applied it to his surfboard, and found it made his feet almost stick to the board in the same way they had stuck to the lounge floor - his mother was less impressed when she found he had taken her floor wax to the beach!

She told him to use paraffin wax instead, so the following day, he put it on his own board and all of his friends' boards too. They removed the sand and re-varnished the boards, so the wax would be left there. He noted that his knees no longer got sore. This was how waxing surfboards began.

When World War II broke out in 1939, it put an end to the surfing lifestyle Gallant and many other young men across America had enjoyed. He joined the Navy and served on the USS Pennsylvania. He was in Pearl Harbour when the Japanese launched their attack on 7th December 1941.

Surviving the war, he returned home and brought up his daughter (and grandchildren) to feel the same passion as he did for the ocean. He surfed when he could for the rest of his life.

The war had a massive impact on the sport of surfing. When the US soldiers were deployed around the islands of Hawaii, they glimpsed the Polynesian culture in which surfing had its roots. Hawaii became a cultural melting pot during the war - and California became the inlet for the infusion of culture.

Over time, surfing travelled across the Pacific Ocean with the US troops and ended up finding its way to Europe, but it wasn't only the culture that spread during World War II - it was also the changes in the way people surfed and the boards they used.

Prior to the war, surfboards were largely made of wood, often causing them to be heavy and unwieldy. During the war, the manufacture of lighter aircraft led to the creation of balsa wood and fibreglass-blended structures. This was an ideal material for surfboards, which became known as foam boards.

The "foamies" required three years' experimentation and technological innovations to make the foam an ideal consistency for the manufacture of surfboards. Today, the first two foam surfboards are housed in the California Surf Museum.

Prior to the war, surfing had been more of a hobby, or a lifestyle choice, but after the war, it developed into a professional action sport, fuelled by technology. The materials used to boost the war effort (fibreglass, resin and Styrofoam) were all used in board technology.

The shorter, lighter boards enabled surfers to move more smoothly through the water, changing surfing styles. New surfboards were more efficient, and surfing as a whole became more romanticised, through marketing it as a part of California life and also through the movies.

Remembrance Sunday services will be taking place on 10th November to commemorate all of the brave men and women who lost their lives during World War II and other conflicts. Lest we forget.