The Surfboard: A Brief History

Surfing is a popular worldwide sport and according to the International Surfing Association, there are an estimated 23 million people taking part across the globe. In the United States, there are around 2.8 million surfers, while there are 1.7 million in Australia and 500,000 in the United Kingdom. 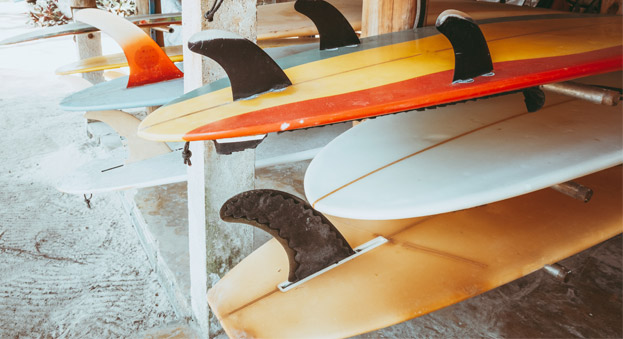 Although the exact origins of surfing are unclear, sailors on a ship in Tahiti were said to be the first Europeans to witness it back in 1767. Historians believe surfing evolved as part of ancient Polynesian culture. It was said the top surfer was also the chief of his local community.

In Hawaii, surfing was part of a rich culture in ancient times. As we know it, the sport is believed to have started in around 1200 AD, although historians say it existed in some form in Tahiti as early as 2000 BC. It wasn't a hobby, it was a way of life.

Making a surfboard was a spiritual experience and a great deal of care went into its construction. The people were interested in discovering the mysteries of the waves and taming the ocean, and the most skilled surfers were highly respected in society.

Tahitian settlers took surfing to Hawaii, using early surfboards that were made by a wood-crafter. The most common surfboards were a simple piece of wood, crafted with no more care than a door, according to author Matt Warshaw's book, The History of Surfing.

It was a different matter for Polynesian royalty, who had carefully crafted surfboards that were also blessed with prayers. There were three types of board: the smallest was the paipo, made for children; next came the 200 lb, 20 ft-long olo, used by the upper classes; the third type of board, the alaia, was said to be the predecessor of modern surfboards.

Surfing as we know it today was said to have been invented on an alaia. It was a medium-size, thin board that was around half the size of an olo and was used by Hawaiian villagers of all social classes as standard.

Surfers who paddled well enough could catch the unbroken swells on the offshore reefs. The board was also manoeuvrable and responsive enough to let surfers ride in the fast, steep, curling section of the wave, and while the huge olo could seem rather cumbersome, surfers could paddle the alaia board directly through the wave zone to the breaking waves and beyond.

The earliest footage of surfers was filmed by inventor Thomas Edison's studio in 1906, when surfers in Waikiki, Hawaii were captured on film.

Although surfing was a way of life for the Polynesians for centuries, it didn't reach the United States until the early 20th century, when James Matthias Jordan Jnr brought it to the East Coast. In 1912, he surfed at Virginia Beach on a Hawaiian redwood board. This has been one of the main surfing centres in the US ever since.

In the 1920s, a major development in board design occurred when Santa Monica lifeguard and surfer Tom Blake took a boat trip to Hawaii. He came to the conclusion that surfboards should be lighter. He started adapting his 15ft-long redwood model by drilling holes in it.

He developed "riding" surfboards that were in line with the longer paddleboards. He reduced the weight of a 10ft-long board to just 40 lbs. It was the first time surfers had a choice between two main board styles.

Blake’s hollow style board was a massive success and in the 1930s, despite the Depression, the number of surfers in California quadrupled.

Blake’s contribution to the surfboard's development continued in 1935 with the introduction of a stabilising fin. It was a feature on which almost all future designs were based. At the time, Blake wrote of how he had never before experienced such stability and control. The board provided all of the traction required.

In 1937, a Waikiki-based group of surfers, The Empty Lot Boys, tried out the latest Pacific System Homes' "Swastika" board, in the days before the swastika was a symbol of Naziism, but time after time, they kept spinning out while trying to hold an angle across the steep wave-face.

Surfer John Kelly invented a design improvement, after realising there was too much planing surface on the board's tail section. He and fellow Empty Lot Boy surfer Francis Heath transformed the squared-off tail, using basic woodworking tools, into a shape that resembled the tail-end of a jet fighter plane! This seemed to do the trick.

Innovators such as Blake, Heath and Kelly remodelled their own surfboards in the days before board design became an industry. After World War II, former Douglas Aircraft worker Bob Simmons, dubbed the “father of the modern surfboard”, became obsessed with creating the world's fastest surfboard.

He experimented with plywood, balsa and Styrofoam composites in an effort to create a lighter, but still buoyant, surfboard. In 1949, he came up with a board made of a polystyrene core and mahogany veneer, sealing it with resin and fibreglass. The result reduced the weight by 50% and created a massive improvement in performance.

The 1960s is recognised as a golden era of surfing. Towards the end of the decade, the “shortboard revolution” occurred. Boards went from 10ft long to around 8ft and by 1970, the top competitors in Australia had reduced the board size further to between five and six feet. This enabled them to adopt a lower and more aggressive stance, connecting more closely with the waves than ever before.

Polyurethane models based on Simmons' design were the industry standard until the early 21st century. However, the world's biggest manufacturer and distributor of the polyurethane blanks used for surfboards, California-based Clark Foam, closed down in 2005.

It was reported that the business was worth $40 million, but owner Gordon Clark had experienced red tape issues with the government over the chemicals used in his products, so he destroyed all the moulds and closed down abruptly. He cited issues with the US Environmental Protection Agency as the reason for closure.

Although polyurethane-core boards are still used, the demise of Clark's has spurred today's designers to experiment with different materials to make surfboards, such as polystyrene foam.

The evolution of the surfboard was accompanied by the birth of specific surfwear clothing brands, the growth of women's surfing and the birth of wave pools in landlocked countries and towns, so that everyone could take part in surfing.

The sport is to make its Olympic debut in 2020, when the world's leading surfers will take part in the competition on Japan's stunning Pacific coastline. Surfing is one of five new sports proposed by the Tokyo 2020 Organising Committee to bring more vibrant and youthful activities into the Olympic programme. Its inclusion was approved in 2016 by the International Olympic Committee.

The event will be held on the open ocean, where the size of the waves and the wind conditions will be important factors. No two waves are alike, and the surfers will truly be competing against nature!

At Ocean Magic, our specialist services create hand-crafted surfboards of the highest quality from our Cornwall factory. Contact us today for more details of our range of top-quality surfboards.