The brightly-coloured Portuguese Man o’ War is a strangely beautiful marine creature - but it's also highly deadly and venomous. Easily recognised thanks to its balloon-like, floating body, the species can be violet, blue or pink. When floating, it can protrude up to six inches above the water's surface.

The Man o' War is propelled by the ocean current and the wind and is usually found in colonies. In fact, it sometimes floats in a massive legion of around 1,000 or more individuals. While this is an amazing sight, it's also lethal, should you be unfortunate enough to be swimming or surfing in the area at the time! 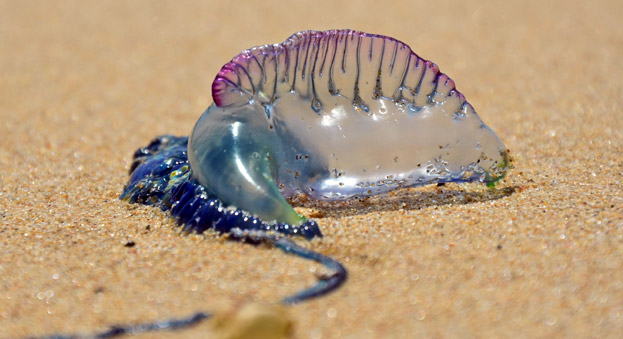 What is a Portuguese Man o’ War?

Often called a jellyfish, it's actually a siphonophore. It gets its name because it is said to resemble an 18th-century Portuguese warship in full sail. Although related to the jellyfish, this is a different species. Siphonophores are members of the Cnidaria family, which is a group of marine species that includes hydroids and corals.

A siphonophore is an animal made up of a colony of small organisms, all working together. There are around 175 different species, some of which are incredibly long - some have been measured at 40 metres!

While many are deep water species, the Portuguese Man o’ War is one of the few which floats on the surface. Despite their venomous nature, they are fragile and can break into many pieces if subject to even the slightest force.

As predators, they catch small fish and crustaceans using their many tentacles. The tentacles hang below the floating body and are 30 feet long on average. They are active swimmers and while a few can be found near the shore on occasion, this isn't regular behaviour.

Where do you find the man o' war?

Normally found in tropical and subtropical oceans, the species seems to migrate to many different regions. They have been found washed ashore along the northern Gulf of Mexico and have also been spotted on the east and west coasts of Florida.

They have been found as far north as the Bay of Fundy, between Canada’s Nova Scotia and New Brunswick provinces and perhaps surprisingly, they have even been seen in the sea surrounding the Hebrides, which is an archipelago of islands off the north-west coast of Scotland.

How dangerous are they to humans?

Although the tentacles contain a nasty venom, stinging nematocysts, it is seldom fatal to humans. The poison consists of microscopic capsules encased in coiled, barbed tubes. These will deliver a venom capable of paralysing crustaceans and small fish.

The man o’ war’s sting is very painful to people and will cause welts on any exposed skin, but is rarely deadly, although it has been known to kill a person on occasion. Beware of finding a man 'o war washed up on the beach, as it can still deliver a nasty sting, so don't touch it, even if you think it's dead.

The effects of the sting include immediate severe pain that can last for around 20 minutes, but in more serious cases, it can trigger breathing difficulties and chest pains.

What should you do if you get stung?

Although scientists say it's possible to treat a sting with home remedies, the NHS advises going to the hospital. This would certainly be recommended in cases where the reaction was severe.

A team of scientists carrying out research at UHM’s Pacific Cnidaria Research Laboratory suggest the best way to treat a sting at home is to rinse the wound with a diluted vinegar solution - this will remove any bits of tentacle that have been left on the skin. They say a 30-second wash can help to combat the effects.

More severe symptoms can include swelling around the wound, vomiting, excessive bleeding, feeling light-headed and suffering a loss of consciousness.

How can surfers stay safe?

Surfers out riding the waves who come into contact with a Portuguese Man o' War must make every effort to stay safe. The most obvious advice is to paddle as far away as possible if you see a man o' war anywhere in the water and not to go near any that have washed up onshore.

Also, listen to the lifeguards: if the red flag is raised, keep out of the water. Lifeguards are there to warn and protect you from creatures such as the man o' war, not to spoil your fun, so heed their warnings.

Unfortunately, if you're already in the water, you might have been stung before you even see the culprit. Be aware and should you fall victim to one of these little blighters, seek medical attention as soon as possible if you suffer any of the more severe reactions.

Ocean Magic is renowned for creating the ultimate surfboards. We put more than 40 years' experience into every board we handcraft at our Cornwall factory. Contact us for more details.