The Birth of British Surfing

When four teenagers started riding the waves at The Cribbar reef, off Newquay's Towan Headland, 92 years ago, they paved the way for the 500,000 Brits. The 1920s saw the birth of British surfing in Cornwall, but our links with the sport go back to the Royal Navy in the 18th century. 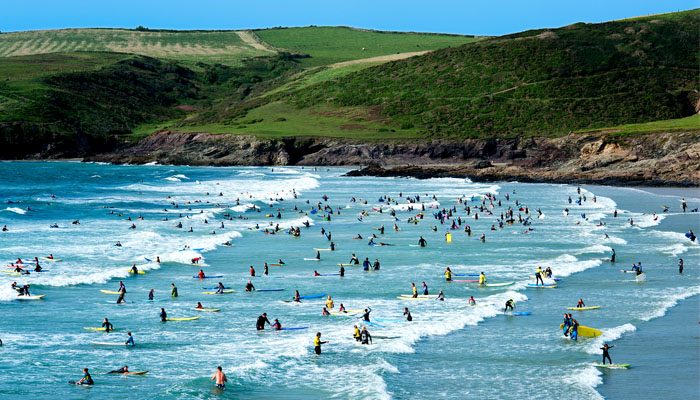 The four friends had been riding 4ft-long wooden bodyboards for almost a decade, when they saw a newsreel of Australian surfers standing up on their boards in 1929. Lewis Rosenberg, Harry Rochlin and brothers Ben and Fred Elvey were inspired to try surfing the Australian way.

After building their own longboard, they hopped on a train to Newquay to try it out. Their endeavours were captured on 9.5mm video film by Rosenberg.

Introducing it to a wider audience, a clip from the film was used in the BBC4 documentary, Sea Fever, in 2010. The museum also released the full film and a book to coincide with its exhibition, British Surf Riders: Surfing before WWII.

Armed only with their 7ft solid wood surfboard, they embarked from their local train station to surf in Cornwall's deserted waters.

Speaking on the video, Rochlin said, "When we swam out and the waves came, we tried to stand on it, as they did in Australia. Eventually, after practice, we managed to stand up on the board. It's incredible when I think about it and it brings back memories."

Their adventures turned into the earliest known film of stand-up surfing in Britain.

Prior to finding the 1929 footage, the earliest photographic evidence of stand-up surfing in the UK was captured in the late 1930s, by Pip Staffieri, of Newquay, who had made his own hollow 13ft longboard after copying a design in an encyclopaedia. He later added a fin to his surfboard, making it one of the world's first finned boards.

The early longboards earned the nickname "coffin lids", as they resembled the heavy blocks of wood used by undertakers! This nickname wasn't far from the truth, as pre-WW2 photos show Britain's early surfers carrying coffin lids fashioned into surfboards on Cornwall's beaches!

British surfers who had travelled overseas in the 1930s arrived home desperate to replicate the craze for stand-up surfing that was sweeping through Australia and South Africa. They turned to undertaker Tom Tremewan, of Perranporth, to make their surfboards; from whatever wood he had.

Old photos show both young men and women rushing into the sea with their heavy, solid, wooden surfboards. Some used homemade boards fashioned from floorboards fastened together by brass screws. They were a far cry from the lightweight, sleek, modern fibreglass boards of today. It's amazing how the early pioneers of surfing managed to stay afloat!

Surfing in the 18th century

The first Brits to witness surfing were the crew of the Royal Navy vessel HMS Resolution, who sailed to Hawaii under Captain James Cook. The Yorkshire-born navigator served in the Royal Navy from 1755 until his death in 1779.

In his captain's journal of 1777, under an entry entitled "A Voyage to the Pacific Ocean", he described how the ship's surgeon, Dr William Anderson, had spotted board riders as he walked along the shore.

The doctor spoke of the "supreme pleasure" they experienced as they were "driven on so fast and so smoothly by the sea". He said the local men "always called out when there was an appearance of a favourable swell."

The resident botanist on HMS Resolution, Joseph Banks, also wrote about the wave riders of Matavai Bay, on the north coast of Tahiti. He described how he saw 12 men swimming in the ocean, using "an old canoe" as a board. "Whenever surf broke near them, they dived under and rose again on the other side," he wrote. They were "driven in towards the shore with incredible rapidity."

How has surfing changed over the years?

Despite the British naval officers and crew observing the activity in 1777, it was 152 years before the first documented surfers appeared on England's shores - namely Lewis Rosenberg and his three friends!

Many changes took place in the 20th century, mainly in the design of the boards, to make surfing a more enjoyable experience. The evolution of surfboards in the past 100 years has been rapid. Fibreglass became a revolutionary board material after being pioneered by Pete Peterson in 1946.

The 1960s were known as the golden era of surfing, when the shortboard revolution began. Surfboards went from an average 10ft long to about 8ft in a decade. By 1970, the top Australian surfers had reduced the length to 5ft. This altered their style and they adopted a lower stance.

Polyurethane boards were the industry standard until the early 21st century, but today, designers and manufacturers are experimenting with different materials for surfboards, including polystyrene foam.

Where are the UK's best surfing beaches?

Britain has some of the finest surfing locations in the world, including Fistral Beach - a straight, sandy, west-facing beach with dunes, around 750 metres long. Like many surfing beaches in Cornwall, it is exposed to large Atlantic swells that provide consistent waves all year round.

The award-winning Polzeath beach, near Wadebridge, is a popular spot for surfers, thanks to its long, slow-breaking, consistent waves and easily accessible location. At low tide, the soft sand extends half a mile. Novices and pros can be found there, trying to catch the perfect wave.

Sennen Cove, also in Cornwall, is another favourite. Its pale sand and clear water curve up towards Gwynver Beach, providing consistent beach breaks. In normal times, it's always a hive of activity, with the south end of the beach being more suitable for beginners due to smaller waves.

Just how popular is surfing in Britain?

People's perception of surfing is that it's traditionally a summer sport, but in fact, it's something enthusiasts do all year round, with some of the UK's best waves coming between September and December in Cornwall and Devon.

According to Surfers Against Sewage, the "green" surfers' organisation, 11 popular UK surfing regions each have a surfer population in excess of 10,000. It's a sport that people in their 50s and beyond are still enjoying.

Each surfer in the UK spends an average of £495 per year on surfboards, surf wear and accessories, £169 on accommodation, £966 on fuel, £222 on car parking, £708 on food and drink in local cafes and bars and £587 in local convenience stores. In life without COVID-19, the UK surfing industry contributes around £1 billion to the economy.

Not all surfers travel further afield, as they say they enjoy world-class waves in their own area. The total number of domestic surfing trips made by Britain's 500,000 surfers each year is 4.2 million, while they travel on surfing trips overseas a total of 269,000 times a year.