The Lofoten Islands, in Norway, are known for their beautiful scenery, open seas and sheltered bays, making them ideal for water sports such as surfing. The world-famous surfers' paradise is an archipelago within the Arctic Circle - yet it experiences unusually warm temperatures, as a result of its high latitude. 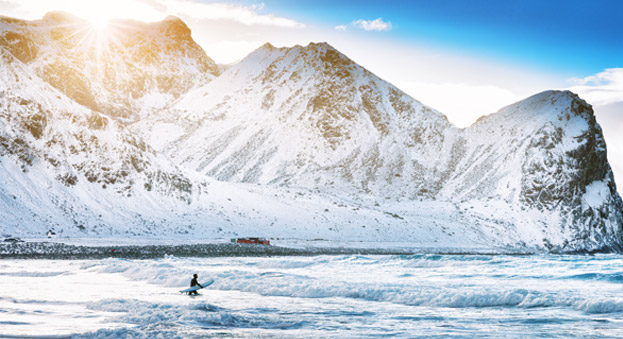 The region receives plenty of positive reviews on Lonely Planet, where Lofoten Islands' beauty is described as “simply staggering”. Lofoten is working towards being certified as a Sustainable Destination, where the impact of tourism is reduced to preserve the local environment, nature and culture, while remaining economically viable.

The local government and the travel industry are on board to ensure the islands are not only a wonderful place to visit, but also a great place to live.

The coastline is a surfing frontier, with the strong winds and short period swell dominating the landscape. Seasons contrast sharply, with a lack of daylight in winter transforming into almost continuous light in summer.

There have been surfers at Lofoten since the 1960s, although the region has become more popular since the 1990s, when wetsuit technology began to develop. There's now a sizable surfing community there, with surfers of every level finding something to suit them.

All surfers at Lofoten wear thick wetsuits. During the summer, slightly thinner suits are recommended. Bear this in mind when preparing for a trip to Lofoten and make sure you have the correct gear.

The first surfers in Lofoten (and probably in Norway) were Hans Egil Krane and Thor Frantzen, who had worked on ships since their youth, travelling the world. They docked in Sydney and saw surfing for the first time.

After trying it out themselves, they returned back home to Lofoten and decided to make their own surfboards. Legend has it they designed their surfboards from a picture on the cover of the Beach Boys' famous 1962 album, Surfin' Safari!

Although surfing in Lofoten continued on a small scale over the next three decades, it wasn't until the early '90s that Kristian Breivik awakened interest in the bay. At the time, there were relatively few surfers in Norway. The few who existed gathered around the Stavanger area.

Breivik moved to Stavanger and spoke of the fantastic waves around Lofoten Islands, north of the Arctic Circle. One day, following his enthusing about the region, a small team of surfers gathered and headed to face the waves at Lofoten.

They found a monster swell from the south-west, creating perfect surfing conditions. Staff from Surfing magazine travelled with them and the subsequent publicity attracted more surfers to the islands.

In the late 1990s, surfers including Spencer Hargraves and Sam Lamiroy made the legendary surf movie, E2K, which was shot from Unstad beach. This attracted more surfers and by 2000, famous surfer Tommy Olsen had moved there.

In the 21st century, Lofoten has firmly established itself as a world-famous destination for surfers. In 2003, Unstad Camping was launched by Frantzen and his wife, Randi. It has grown from just a few cabins in the early days to meet the ever-growing demand. Today, it is run by their daughter, Marion Frantzen.

As well as surfing, Lofoten's location and milder climate enable visitors to experience the midnight sun between late May and mid-July and view the Northern Lights from September to mid-April, creating a magical holiday experience.

Passionate about surfing, Ocean Magic specialises in hand-crafted surfboards that we custom build at our Cornwall factory. Contact us today for more details.