Surfers' sunglasses are an important accessory - not only as a fashion item but to ensure eye safety. Surfers are prone to eye problems, due to increased exposure to the sun. Wearing special shades can help prevent cataracts, macular degeneration and other disorders.

Surfing as we know it dates back to the 18th century, when sailors on a ship in the South Pacific were the first Europeans to witness Polynesian surfers around the island of Tahiti. Although sunglasses were available a century later, they were a rarity and certainly not something a surfer would consider wearing. 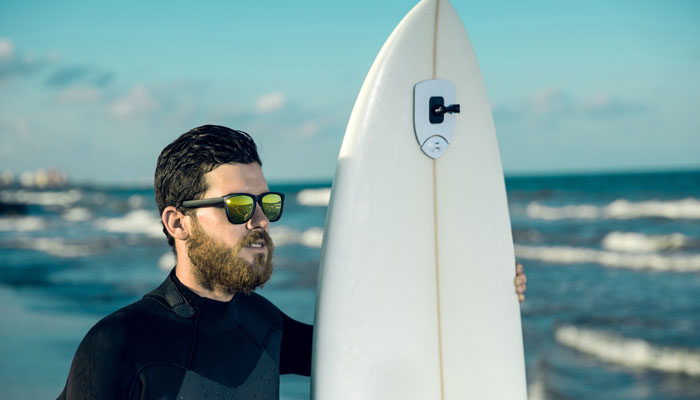 In the 19th century, basic sunglasses were sold in some general stores in the United States - usually round or octagonal, the lenses were black or dark blue. Normally worn by the visually impaired or the elderly, they weren't very stylish at all.

The first cheap, mass-produced sunglasses were manufactured in 1929 by Sam Foster in Atlantic City, New Jersey. Fashioned from celluloid, they were marketed as Foster Grant sunglasses. He sold them from Woolworth's on The Boardwalk in Atlantic City.

Although they became popular among visitors going to the beach, they didn't provide a solution for surfers, as it was difficult to keep ordinary glasses in place while surfing. Throughout the 20th century, surfers battled against eye problems. Goggles and dive masks didn't work well, and over time would begin to feel uncomfortable, so they couldn't be worn for too long.

As recently as the early days of the internet, surfers chatted in online community groups about a lack of appropriate eye protection - the difference between surfers' sunglasses and normal sunglasses is the effect of wearing them in the sea for an active sport.

Ordinary sunglasses, and even wrap-arounds of the type worn by cricketers, were just too loose to stay in place. They would also get saltwater behind them, or steam up, so although they may protect the wearer from the sun's glare, it still wasn't possible to see properly.

It was the early 1990s before brands began to launch new ranges of specially designed sunglasses for surfers. One of the most famous, Fly Industries LLC, was launched in 1991 by 39-year-old surfer Dan Flecky, from Newport Beach, California. He produced a range of sunglasses known as Black Flys.

Another early manufacturer of surfers' sunglasses was Surf Shades, founded by surfer Dave Bent, in Newport Beach, California. He said the idea came to him after years of staring into the glare of the sun while waiting to surf. He said he wanted to wear sunglasses in the water, but there wasn’t anything available at that time.

His goal was to safely wear his prescription sunglasses while surfing, including keeping them secure, even if enduring the violent impact of a major Wipeout. He started to develop prototype specs with a strap, collar and leash and subsequently was able to wear his sunglasses every time he rode the waves.

Over the next few years, he developed and improved his product, using a breakaway clip on the collar, should the sunglasses ever get caught on anything. They were made with neoprene to enable them to float. Bent then knew he could wear his sunglasses safely while surfing, whatever the circumstances.

Today, Surf Shades is still a leading manufacturer of sunglasses and the brand has an ecommerce store, as well as retail shops across the United States and in other countries such as Brazil, Canada, New Zealand and the Dominican Republic.

For surfer Chase Fisher, 32, of San Diego, launching surfers' sunglasses has made him a millionaire. The young entrepreneur founded Blenders, a rapidly-growing company, which exploded online after its launch in 2011. He took his inspiration from his San Diego roots and named his ranges after local neighbourhoods.

His North Park Collection is a customer favourite, thanks to the sunglasses with a classic round rim. By 2016, the company had hit fever pitch, bringing in $1.3 million in sales. In 2019, sales hit the $45 million mark.

Fisher started surfing at six and was raised in Santa Barbara. He graduated from San Diego State University, after being a sponsored amateur surfer from the age of 13 and right through college. He was an "influencer" before it became a trendy word. This all helped him to launch Blenders when he was just 23. The company sponsors other athletes who identify with the brand, such as pro surfer Lakey Peterson, wakesurfer Austin Keen and snowboarder Jessika Jenson.

He spotted a gaping hole in the market for surfers' sunglasses, as he spent a lot of time on the beach as a surf coach during college, but saw the same old sunglasses wherever he looked - mainly Ray-Bans and Oakleys, both of which were high-end brands with a price tag to match.

In 2011, on his way to a San Diego nightclub, he popped into a fashion store and bought a pair of neon green sunglasses to wear that evening. The unusual shades attracted a lot of attention. He said, "People were saying 'these are crazy' and prying them off my face!"

He realised there was a demand for bright, unusual, beach-style sunglasses - but sturdier and more fashionable than the pair he had bought. He spotted the gap in the market because the only sunglasses around at the time were designer ones costing $100 a pair, or cheap, bright, mass-produced ones that weren't really that great. Calling them Blenders after a street name (Hornblend Street) where he once lived in Pacific Beach, he designed his own range of surfers' glasses that he would wear himself.

Today, his sunglasses start at $40 and are in the mid-price range. His company in San Diego has its own team of in-house designers and there are some new and unusual lines, such as purple polarised lenses with tortoiseshell frames, sky blue aviators and shades with unicorn pink gradients.

Should all surfers wear sunglasses?

Surfers should wear sunglasses because of the potential eye damage caused by constant exposure to the sun, say doctors. Common eye problems include pterygium - a growth of the mucous membrane that covers the white part of your eye. Although it's treatable, it can cause redness, inflammation and dryness of the eye. Surfers are also more prone to cataracts and macular degeneration, which can result in blurred or no vision in the centre of the visual field. Sadly, some surfers even get eye cancer.

The best surf sunglasses have a ventilated frame to help reduce fog. The lenses should be polarised to reduce glare and they must be 100% UVA and UVB resistant to block the sun's harmful rays. The tint of the lenses is also important because the light differs, depending on the time of day.

Bright, sunny conditions, particularly the midday sun, need a darker lens - usually grey. At dawn or dusk, brown lenses are ideal. On overcast days, you may feel you don't need sunglasses, but you still need to block out harmful UV rays. You can wear glasses with almost clear lenses when it's a dull day.

I sight for sore eyes!

Ocean Magic creates hand-crafted, bespoke surfboards of the highest quality at our Cornwall factory. Whether you want big wave guns surfboards, keel fin surfboards, longboard surfboards, or a particular brand, such as Nigel Semmens surfboards, we can help.

Contact us today for further details of our range of top-quality surfboards or visit our website to see more.