Hitting the best waves is every surfer's dream. There are hundreds of amazing and famous waves out there and it would probably be impossible for one person to try them all! It's a constant matter of debate where you'll find the ultimate thrill, so regular surfers have spent hours discussing what would make up their top ten waves in the world.

Although it's by no means an exhaustive list, read on to find out more about the waves that every surfer should have on their bucket list... 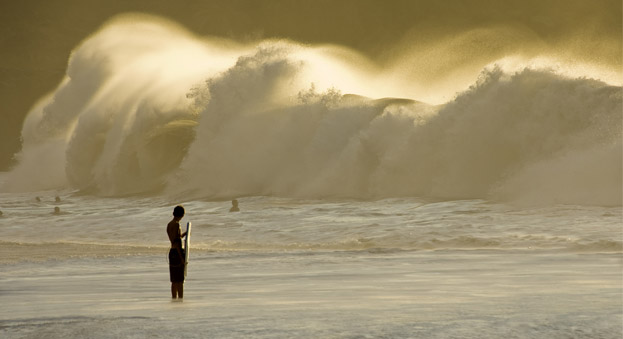 Hawaii's waves and beach conditions are as unique as the islands. Waimea is renowned for its 30ft winter waves and is one of the best places to watch some of the world’s greatest and most daring surfers. The water is calmer in summer and is still a great destination, but in winter, surfers can experience the full power of the ocean. Locals and tourists love Waimea bay, where the waves get really big. The famous Eddie Aikau surfing contest is held there - an epic competition when entrants paddle into 25ft-plus waves. It was the unofficial world record holder for the biggest wave ever ridden, when Ken Bradshaw surfed an 85ft wave there on 28th July 1998.

The beautiful village of Teahupoo, on the south-west coast of Tahiti in the Pacific Ocean, is known for its surf break and heavy waves offshore - sometimes reaching up to seven metres. The clear blue waters give no clue to the deadly power of one of the world's heaviest waves - except perhaps for the village's name, which translates to “the place of the broken skull”. The area has gained in surfing prominence since 1999, when it was first included on the WCT tour.

La Graviere, on the Atlantic coast of France, attracts the world's best surfers, especially when the autumn storms strike. It offers big, heavy, world-class barrels. Within the global surfing community, the coastline is legendary. It's one of the most popular destinations in France, proven by the fact Quiksilver holds the Pro France competition there every September. With waves of up to 12ft at most times of the year, the best conditions occur when there's a west to north swell, with an easterly wind.

Aileen's is a hotspot for European surfers, as it boasts gigantic waves of more than 40ft. It attracts big wave riders at all times of the year. The right-hand reef break is accessible only by a two-mile boat trip or a jet-ski ride. The monster waves have raised the bar for European tow-in surfing. When Aileen's was first discovered, it was questionable whether people could surf there at all because of the size of the waves, but undeterred, surfer John McCarthy was the first person to take it on. His experiences in 2005 helped put the Irish surf spot on the international map.

Located in the Basque region, the left-hand tube is one of Europe's heaviest waves, attracting a strong following. Much to the delight of the pro surfers, it's the location for the WCT Billabong Pro every October. It has been a popular destination for surfing holidays for more than 40 years now. Mundaka has almost mythical status, as the reeling left-hander can produce 200-metre rides that are fuelled by a south-west wind and north-west swell, the waves breaking along the triangular sandbank.

This is probably the world's most photographed wave and home of the Billabong Pipeline Masters every December. Known simply as "Pipeline", it is among the most technically difficult waves to master, due to the near-vertical drop the surfer must take to survive the wall of water that rushes overhead. The beach is rated as one of the best on Oahu. Winter swells roll into the island's north shore, pushing up on to the shallow reef. This creates some perfect waves that pro surfers can normally only dream about.

Jeffreys Bay's famous wave is one of the world's best right-handers, offering long, clean rides. It provides a challenge even for the pros, thanks to its limb-burning length. It hosts to the WCT Billabong Pro every year. Although a relatively small region, it's a surfers' haven in South Africa renowned for producing one of the world's best right-hand surf breaks, while the town's streets are alive with surfers hoping to live out their dreams from dawn till dusk.

Puerto Escondido, also known as the Mexican Pipe, is a heavy wave which is famous for being a breeding ground for local surfers. Over the years, it has become a focal point of the world's surfing scene. Its popularity began when the Ripcurl Search first went there in 2006. The waves reach heights of 40-plus feet. Peak season is May to August, when the swells are too big for most surfers and are left to the pros.

The left-hander at Raglan, on the west coast of New Zealand, has some of the longest rides in the world. It consists of more than 600 metres of breaking waves and has been popular since it featured in the surfing documentary, The Endless Summer, in 1966. Particularly popular with long-boarders, it isn't for the faint-hearted! Raglan is a favourite destination for surfers wanting to get their adrenaline pumping.

This is one of the scariest waves in the world, according to experienced surfers. Renowned for shooting up from a few feet to overhead in a matter of seconds, it isn't as well-known as some of the other waves in the top ten, but has been labelled one of the "deadliest waves on the planet" in terms of the danger levels. A relatively new wave on the surfing scene, it features many layers folding on top of each other. It has been described as "borderline impossible to surf" but looking like a "work of art".

To surf the ultimate waves, you need the right surfboard! Ocean Magic has more than 40 years' experience in creating hand-crafted surfboards at our Cornwall factory. Contact us for more details.