Surfers Against Sewage: The Uphill Battle

Surfers are facing an uphill battle against high levels of plastic pollution in our oceans. Carelessly discarded plastic waste has been described as our planet's "biggest ever challenge". It poisons marine life, gets into the food chain and kills marine animals who become entangled in waste such as plastic bags and ring can-holders.

Environmentalists and scientists have called our oceans a "sea of plastic", as a result of carelessly-discarded bags, food wrappers and bottles that are causing a pollution crisis. A staggering 12 million tonnes of plastic rubbish ends up in our oceans every year. 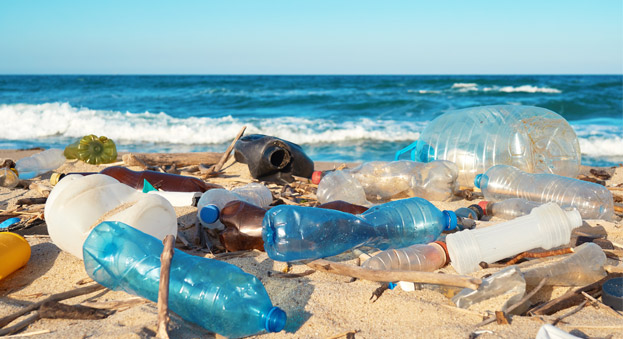 Millions of marine creatures including seabirds, whales, dolphins, fish and other wildlife are dying due to ingesting waste. Scientists say around one million seabirds and 100,000 marine creatures die each year due to being tangled in plastic bags, or plastic packaging from drink cans - a plastic grocery bag can take up to 100 years to disintegrate totally, so it follows that the same bag can kill many animals during its long lifecycle.

Waste plastic in the ocean comes from many sources - plastic used to wrap food and drink is a common cause, as it's often carelessly discarded. Waste such as rubbish dropped in the street can end up in the drainage system after being swept along by wind and rain.

Scientists say the world's rivers transport between 1.15 and 2.41 million tons of plastic into the ocean every year. Environmental group Greenpeace says around 20% of plastic waste is caused by discarded fishing gear, such as nets, floats and lines, plus other items thrown off boats.

Industrial processes can cause plastic waste, such as the nurdle - a small plastic pellet shipped around the world to be manufactured into other goods. However, en route to its destination, it can fall into the sea by accident, or waste nurdles are illegally dumped near the coastline, or in rivers.

Synthetic clothing can contain fibres of plastic and these can be transferred into the water system during washing, eventually ending up in the sea.

However, most plastic waste in the ocean comes from the land - and in particular from single-use plastics such as fast food wrappers.

Many people may think there's nothing we can do about it and that it's too big a problem for individuals to tackle, but if every single person made a change in their lifestyle and became involved in reducing plastic waste, the reduction of plastic litter in our oceans would be significant.

Lifestyle changes, such as no longer buying products that contain single-use plastics, are a start. Consumers can also carry out practical activities, such as recycling plastics at home, or even doing a litter-pick on your local beach.

Marine conservation charity, Surfers Against Sewage, works in liaison with communities to protect our oceans, beaches and marine life from pollution. A group of Cornish surfers from Porthtowan and St Agnes launched the charity in 1990 on Cornwall's north coast.

It received the royal seal of approval when it was one of seven charities chosen by Prince Harry and his bride Meghan Markle to receive donations, after the couple asked for money in lieu of wedding presents in 2018.

Surfers often encounter plastic during their time out in the sea and as a result, Surfers Against Sewage has turned its attention to national initiatives, including the Autumn Beach Clean and the Big Spring Beach Clean series.

Surfers are urging communities to protect their coastline and to take practical steps to clean up the beaches by organising and supporting litter-picks on the shores. SAS has created the UK's biggest beach and river clean-up community, with a network of volunteers clearing more than 100 tonnes of plastic waste annually.

The charity is also working to educate the next generation of consumers, by liaising with hundreds of plastic-free schools across the country. It has launched the Waves All-Party Parliamentary Group to urge politicians to introduce policies which will stop plastic from entering the environment in the first place.

The surfers' ongoing Protect Our Waves campaign is aimed at increasing public awareness about the importance of the sea to our British coastal communities. Surfers Against Sewage is determined to spread the word that our wave resources should be valued by people UK-wide.

Local communities can help by getting involved in their own beach clean-ups. You don't have to be a surfer to want to clean beaches and put an end to the rising tide of plastic pollution.

The Big Spring Beach Clean 2019 has begun and members of the community are invited to lead a beach clean in their local area. For more details on how you can start, email Surfers Against Sewage at beachcleans@sas.org.uk - you really can make a difference.

Unfortunately, plastic pollution is a global issue and choosing a beach won't be difficult, as the coastline is contaminated by carelessly discarded waste. However small your efforts, anything you can do will contribute towards cleaning up the environment - and you might even inspire others to do the same. You will also get the chance to spend time with like-minded people who are eager to do something useful for our wildlife.

Surfers Against Sewage has an ongoing partnership with Cornwall Council and Clean Cornwall, enabling them to organise clean-ups on Cornwall's beaches whenever they wish. Contact the SAS Beach Clean Team if you know of a local beach that needs some attention!

With more than 40 years' experience, Ocean Magic handcrafts high quality boards on-site at our Cornwall factory. Please contact us today to find out more about our range of surf boards.