Nicaragua is one of the greatest places on earth to surf. Located in the Pacific Ocean and bordered by the Caribbean, Honduras and Costa Rica, it has an ideal tropical climate. Warm water and perfect waves, combined with stunning scenery and delicious cuisine, make Nicaragua a surfers' paradise.

Beautiful, relatively cheap and uncrowded, the south-western coast boasts epic beachbreaks, some great reefbreaks, a couple of pointbreaks and a heaving outer-reef slab. For most people, this is just perfect. Most surfers are satisfied with uncrowded beaches and decent waves.

They will go home sunburned and exhausted, with a kaleidoscope of surfing memories - which is exactly what Nicaragua provides. Many people consider it to be the jewel in Central America's surfing crown, boasting many untapped beaches and some of the most consistent offshore winds on the planet. 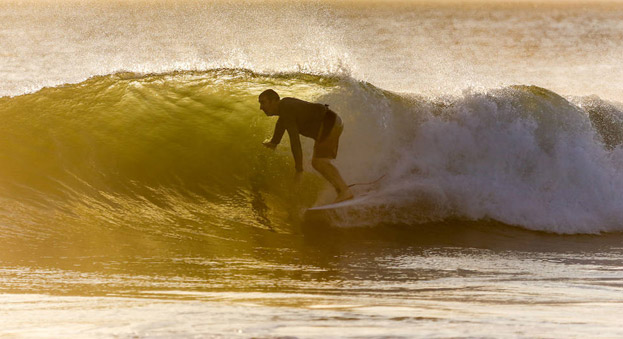 Nicaragua has a selection of destinations for beginners. Playa Santana, in Popoyo, is one of the best beginners' surf beaches. It also has outer reef breaks, offering surfing that's more challenging as the week progresses.

Located in south west Nicaragua, the area is unspoiled and scenic, so it's an ideal spot for getting away from it all. The best time to go is between March and June, when the temperature ranges between 28°C and 32°C during the day.

Another great place for beginners is Remanso Beach, south of San Juan del Sur, where you can immerse yourself in the natural scenic beauty and quiet beach, which is an ideal place to go if you've never been on a surfboard before.

The waves are consistently small to medium-sized and there are two beach restaurants for a re-fuel during the day. Again, the best time to go is between March and June, when the sea water is between 25°C and 28°C.

Nicaragua also has plenty of destinations for experienced surfers. The region is unique, thanks to its offshore winds, 300 days a year. About 50 miles inland, Lake Managua funnels the wind from the Caribbean, creating steady to gusty offshore winds.

Playa Maderas is a location where the wind is usually perfect, as it’s next to Lake Managua. It offers hollow lefts and rights, handling long period swells quite well. A ten-minute drive from San Juan del Sur, it is a popular destination for tourists and locals alike - it can get quite busy later in the day, so get up early to beat the crowds.

Nicaragua has its share of top surfers, who are promoting the sport and leisure activity to attract more people. Local surfer Javier Baldovinos (better known as Baldo) was born and raised in Managua. He has always been passionate about the ocean and has surfed all over the Pacific coast for the past 14 years.

As the founder and president of National Surf Circuit of Nicaragua, he has been instrumental in the promotion, development and organisation of surfing competitions since 2005. He also organises surf tours, which he promotes as being led by the top surfers of Nicaragua.

Legendary surfer and stunt performer Brock Little, who was brought up in Haleiwa, Hawaii, pushed the boundaries of big wave surfing. He would go to Nicaragua on surfing trips, particularly if the waves in Hawaii weren't great. He was a mentor to a generation of younger surfers, until tragically, he lost his life to cancer in February 2016, at the age of 48.

In the 1970s and early '80s, Nicaragua's waves attracted the likes of influential California surfer George Greenough, who is famous for his work in board designs and on films such as Crystal Voyager in 1973. Other influential surfers who visited Nicaragua included Kevin Naughton and Craig Peterson, the travel correspondents for Surfer magazine.

Brazilian surfer Adrian Kojin visited Nicaragua in 1987, when he was making a road trip on his motorbike to surfing destinations. After discovering a "beautifully groomed" beach and "pointbreak surf", he described how he'd been "made to feel welcome" every step of the way.

The International Surfing Association was delighted when Stand Up Paddle, the fastest-growing discipline of the Olympic Federation, was added to the programme of the Central American Games in 2017, alongside surfing. The event made its debut in Managua, Nicaragua, generating great publicity for the surfing destination.

Ocean Magic puts more than 40 years of love and experience into every board we hand craft on-site at our Cornwall factory. Contact us to find out more about our top quality range of surf boards.