Newquay's biggest surfing spot, the Cribbar, isn't for the faint-hearted. Located alongside Fistral Beach, its 30-40 ft waves are famous for attracting top surfers.

The massive waves, described as "death-defying" and like a "beast", are created when the sea moves over the reefs located 500 ft off Towan Head. They appear only a few times a year when the wind and swell combine to create ideal conditions. 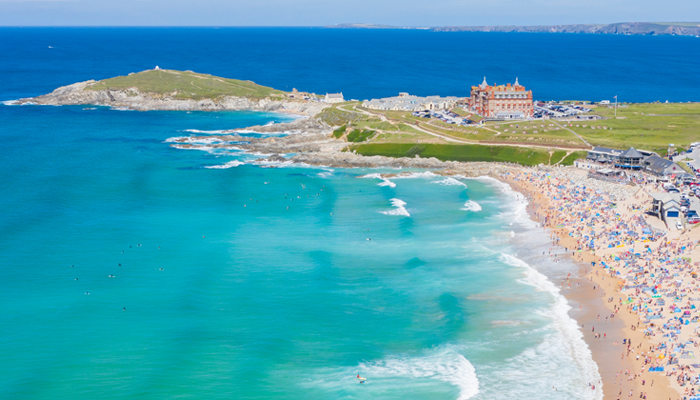 The surfing spot is named after the Cribbar reef, stretching out under the sea from the headland for half a mile. It first gained notoriety as one of the best-known big wave surfing spots in Britain in December 2003, when Chris Bertish surfed there.

Although people have surfed at the Cribbar since the mid-1960s, South African surfer Bertish put the famous monster wave in the global spotlight. Spectacular photographs of the stand-up paddle boarding Guinness World Record holder dropping into the Cribbar trended all over the world.

The 29-year-old was modest about his achievement, saying later on his website he was, "clueless as to what the fuss was about", and claiming his feat was, "blown out of proportion".

He said he had watched the spot for a long time, while living in Cornwall, trying to work out when the biggest wave was ready to break. On the morning in question (9th December 2003), he should have been working, but he saw the giant waves breaking from his window and knew the time was right.

He called his boss and asked for the morning off. Luckily, he agreed, so Bertish set off for the beach with an 8 ft 6 ins surfboard, with a regular 8 mm leash, rather than a big wave leash. He surfed for two-and-a-half hours and said it was an "unreal" experience, describing the Cribbar's famous wave as a "big drop with large, lipped roof".

As the wind grew stronger, he started paddling in - unaware that he had gained an audience of more than 30 people who had seen his daring antics. He didn't realise they were actually there to watch him, quipping, "I thought something had happened, or someone was lost at sea."

He was bemused that the crowd had gathered to watch him surf - until his phone started ringing later in the day. "By lunchtime, I had magazines and newspapers calling me from all over the country," he said. Modestly, he added, "It wasn’t anything that spectacular!"

The following day, he made headline news on television and featured in five national newspapers, even making the front page. "I just went surfing, like I would back home," Bertish said. "Everybody was saying how insane it was."

Surfing in the sixties

While Bertish made the headlines in 2003 for his endeavours, around 50 years earlier, surfers had been battling to conquer the Cribbar in the days when it was a quiet and little-known spot. Local boy Roger Mansfield remembered watching experienced surfers tackle the big waves in 1966, when he was a 14-year-old, standing on Towan Head.

He watched Australian surfers Pete Russell, Rick Friar and Johnny McElroy and American Jack Lydgate paddle out on their long surfboards. They didn't have wetsuits or leashes and there were very few people to witness their endeavours.

Mansfield said no one outside the surfing community knew anything about the big wave called the Cribbar in those days. About 20 people were watching, feeling a mixture of excitement and anxiety because it was the first time any of them had experienced waves that big.

The strong currents required the surfers to paddle constantly in order to stay in the right position. Lydgate wiped out on a big wave - and due to not having a leash, he had to swim for an hour to save his board from the rocks.

Mansfield - the British surfing champion in 1970 and author of The Surfing Tribe - described it as "death-defying stuff", with the challenges of the Cribbar creating a breakthrough for surfing in England. "These people were the pioneers of big wave surfing," he said.

One thing everyone agrees is that the waves at the Cribbar are for experienced surfers only. The inexperienced shouldn't go there, as it's far too hazardous.

Professional big wave surfer Tom Butler, 32, who has surfed some of the biggest waves in the world, says "everything comes together" at the Cribbar in terms of the light winds and tide, making it "quite rare". He said it was more challenging than some of the other spots where he had surfed around the world.

The strong currents can quickly pull surfers off course, so if they don't paddle constantly, they can find themselves being swept into dangerous areas, where the waves break off the rocks. Butler said it was challenging being out in the middle of the sea, with the strong currents. The "sweet spot" is said to be an area 98 ft out, where the water is relatively shallow, but it can be hard to get in the right place.

Experienced surfer Rob Barber recalled breaking a leash and ending up being swept up onto the Towan Head rocks in a 15 ft swell. Having surfed big waves all over the world, he says the Cribbar remains one of the heaviest spots.

Barber, a watersports instructor and founder of Newquay Activity Centre, describes the waves there as "mutating into evil beasts"! He added, "You're out there in the middle of nowhere - it's hard to maintain your position."

He first paddled out to the Cribbar when he was only 16, but realised it wasn't for inexperienced surfers. He urged beginners to take it slowly when they were just getting into riding the big waves, adding, "The Cribbar is definitely not for the inexperienced."

He also suggested surfers should have a "buddy system" in place, so other people knew when they were going into the water.

Record waves at the Cribbar

The Cribbar's famous waves occur only a few times a year - the weather and swell conditions have to be perfect to create the massive waves. Big wave surfers keep an eye on the weather reports as they attempt to work out if the monster waves are on their way.

To break on The Cribbar, the ideal conditions are said to be a big swell, with a long period in between each wave. The waves often become more defined as they travel. They have more power. Once this occurs, a good south-easterly offshore wind is needed to create the best chance of some monster waves.

While waves of 30 ft are said to be the norm when the Cribbar breaks, there are reports of 40 ft waves as well. In normal pre-Covid times, surfers travelled from all over the world to surf there. Surfer Today listed The Cribbar as one of the top seven surf spots in Europe.

Now, as the pandemic travel restrictions are gradually being lifted, surfers from farther afield are expected to travel to Cornwall to enjoy the thrills of the Cribbar this summer.